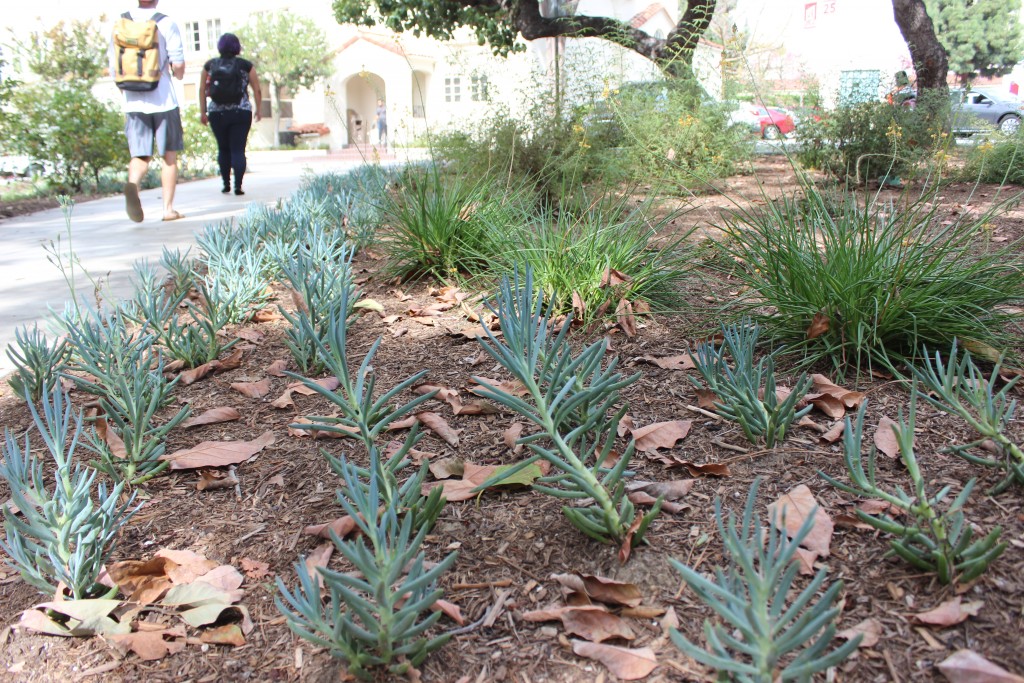 According to Bill Weinmann, he has three projects he is currently working on and hopes to complete by the end of the school year in May. The projects will include reintroduction of native and drought-tolerant plants and installation of drip irrigation to areas near the residence halls (Stauffer, Johnson, and Ball), Mendenhall, and the campus center on the corner of Earlham and Painter. He also stated how he would like to have grey water systems installed using Campus Inn’s grey water before school is out in May. Using grey water systems can be beneficial to the environment and also to the campus’ budget.

One of the projects that Bill would like to do for this semester has already been started. They started to transform the area near Diehl Hall. The whole project would include a passage way that would continue from Villalobos to Diehl and on towards Platner and the freshman dorms. This is a large area of land that is a major part of campus because it would be partially in both the Upper and Lower Quads of campus. The areas in front of the freshman dorms still need to be worked on. Bill said that their plan is to gut the area rid of much of the grass and plant natives and drought tolerant plants. He also would like to put drip irrigation in this area as well.

Drip irrigation is becoming a vital part of the Whittier College campus. It is necessary to find a middle-ground between aesthetics and sustainability. This process can be a part of that mediation. It does not take up a large amount of space and can be easily disguised and hidden. It reduces energy costs as well as it uses less than half of the amount of water that sprinkler systems use. Although it can be costly, it has been proven to pay off in the future. The only negative to the implementation of these systems would be that they could be easily damaged. To protect them, there have been the installation of mulch coverings. With the addition of more and more drip irrigation systems, we will start to see more of mulch coverings around campus. Whittier College has started to implement drip irrigation systems for the Wardman Slope Project. However, there are further plans to install more systems around campus. There is a desire for the implementation of a drip irrigation system by Villalobos that goes through Diehl and to the freshman dorms. Also, installation on the corner of Earlham Dr. and Painter Ave. where the Whittier College sign is located in front of the Campus Center parking lot.

Whittier College would like to plan to have a grey water system that runs from the Campus Inn’s kitchen that flows to the plants in front of the Whittier College sign located on the corner of Earlham Dr. and Painter Ave. This is one of their long term plans that they plan to start now but it is a part of the five year plan that facilities has in mind for sustainable projects. It will take the cooperation of both Sodexo and Bon Appetit to complete this project. Bon Appetit does have the money set aside for projects specifically for grey water. They have about $20,000 set aside for it. Although they hope to have it done by May it could possible take longer depending on both parties.